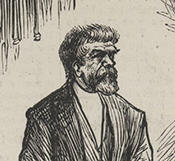 Representative from Pennsylvania; born in Philadelphia, Pa., April 12, 1814; pursued classical studies; apprentice in a jewelry establishment 1828-1835; moved to Boston, Mass, in 1835 and was engaged as a journeyman jeweler; returned to Philadelphia in 1840; studied law; was admitted to the bar in 1841 and practiced in Philadelphia, Pa.; deputy prosecuting attorney for the city and county of Philadelphia in 1845 and 1846; judge of the court of common pleas for Philadelphia 1846-1856; unsuccessful candidate for election in 1856 to the Thirty-fifth Congress; delegate to the Republican National Convention in 1860; elected as a Republican to the Thirty-seventh and to the fourteen succeeding Congresses and served from March 4, 1861, until his death in Washington, D.C., January 9, 1890; chairman, Committee on Coinage, Weights, and Measures (Fortieth, Forty-first, and Forty-second Congresses), Committee on Ways and Means (Forty-seventh Congress), Committee on Manufactures (Fifty-first Congress); interment in Laurel Hill Cemetery, Philadelphia, Pa.
Courtesy of Biographical Directory of the United States Congress
Next page