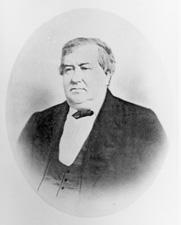 KING, Preston, Representative and a Senator from New York; born in Ogdensburg, N.Y., October 14, 1806; pursued classical studies and graduated from Union College in 1827; studied law; admitted to the bar and commenced practice in St. Lawrence County, N.Y.; established the St. Lawrence Republican in 1830; postmaster of Ogdensburg 1831-1834; member, State assembly 1835-1838; elected as a Democrat to the Twenty-eighth and Twenty-ninth Congresses (March 4, 1843-March 3, 1847); was not a candidate for reelection in 1846; chairman, Committee on Invalid Pensions (Twenty-ninth Congress); elected as a Free Soiler to the Thirty-first and Thirty-second Congresses (March 4, 1849-March 3, 1853); elected as a Republican to the United States Senate in 1856 and served from March 4, 1857, to March 3, 1863; did not seek reelection; chairman, Committee on Revolutionary Claims (Thirty-seventh Congress); resumed the practice of law; presidential elector on the Republican ticket in 1864; appointed collector of the port of New York 1865; committed suicide by leaping from a ferryboat in New York Harbor, N.Y., on November 12, 1865; interment in the City Cemetery, Ogdensburg, N.Y.
Courtesy of Biographical Directory of the United States Congress
Next page