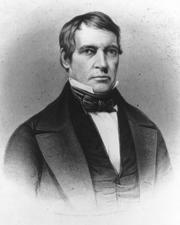 Representative from North Carolina, a Senator from Alabama, and a Vice President of the United States; born in Sampson County, N.C., April 7, 1786; attended private schools; graduated from the University of North Carolina at Chapel Hill in 1803; studied law; admitted to the bar in 1806 and commenced practice in Clinton, N.C.; member, State house of commons 1807-1809; city solicitor of Wilmington, N.C., 1810; elected to the Twelfth, Thirteenth, and Fourteenth Congresses and served from March 4, 1811, until November 4, 1816, when he resigned; secretary of the legation at Naples and later at St. Petersburg; returned to the United States in 1818 and located in Cahaba, Ala.; planter; delegate to the convention which organized the State government; upon the admission of Alabama as a State into the Union in 1819 was elected as a Democratic Republican to the United States Senate; reelected as a Democratic Republican and as a Jacksonian in 1822, 1828, 1834, and 1841, and served from December 14, 1819, until April 15, 1844, when he resigned; served as President pro tempore of the Senate during the Twenty-fourth through Twenty-seventh Congresses; chairman, Committee on Public Lands (Twenty-second Congress), Committee on Commerce (Twenty-second, Twenty-fifth and Twenty-sixth Congresses); Minister to France 1844-1846; appointed and subsequently elected as a Democrat to the United States Senate to fill the vacancy caused by the resignation of Arthur P. Bagby and served from July 1, 1848, until his resignation on December 20, 1852, due to poor health; served as President pro tempore of the Senate during the Thirty-first and Thirty-second Congresses; chairman, Committee on Foreign Relations (Thirty-first Congress), Committee on Pensions (Thirty-first Congress); elected Vice President of the United States on the Democratic ticket with Franklin Pierce in 1852 and took the oath of office March 24, 1853, in Havana, Cuba, where he had gone for his health, which was a privilege extended by special act of Congress; returned to his plantation, "King's Bend," Alabama, and died there April 18, 1853; interment in a vault on his plantation; reinterment in Live Oak Cemetery, Selma, Dallas County, Ala.
Courtesy of Biographical Directory of the United States Congress
Next page