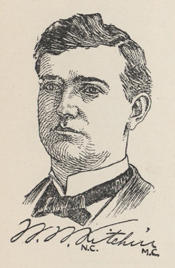 KITCHIN, William Walton, (son of William Hodges Kitchin, brother of Claude Kitchin, and uncle of A. Paul Kitchin), Representative from North Carolina; born near Scotland Neck, Halifax County, N.C., October 9, 1866; attended private schools and Vine Hill Academy; was graduated from Wake Forest College, North Carolina, in 1884; edited the Scotland Neck Democrat in 1885; studied law in Scotland Neck and at the University of North Carolina at Chapel Hill; was admitted to the bar in 1887 and commenced practice in Roxboro, N.C., in 1889; chairman of the county executive committee in 1890; nominee of his party for the State senate in 1892; elected as a Democrat to the Fifty-fifth and to the five succeeding Congresses and served from March 4, 1897, until January 11, 1909, when he resigned; Governor of North Carolina 1909-1913; resumed the practice of law in Raleigh, N.C.; died in Scotland Neck, N.C., November 9, 1924; interment in the Baptist Cemetery.
Courtesy of Biographical Directory of the United States Congress
Next page