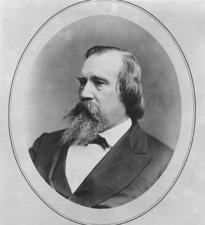 LAMAR, Lucius Quintus Cincinnatus, (uncle of William Bailey Lamar and cousin of Absalom Harris Chappell), Representative and a Senator from Mississippi; born near Eatonton, Putnam County, Ga., September 17, 1825; attended schools in Baldwin and Newton Counties; graduated from Emory College, Oxford, Ga., in 1845; studied law in Macon; admitted to the bar in 1847; moved to Oxford, Miss., in 1849, where he practiced law and served one year as professor of mathematics in the University of Mississippi at Oxford; moved to Covington, Ga., in 1852 and practiced law; member, Georgia State house of representatives 1853; returned to Mississippi in 1855; elected as a Democrat to the Thirty-fifth and Thirty-sixth Congresses and served from March 4, 1857, until his retirement in December 1860 to become a member of the secession convention of Mississippi; drafted the Mississippi ordinance of secession; during the Civil War served in the Confederate Army as lieutenant colonel until 1862; entered the diplomatic service of the Confederacy in 1862 and was sent on a special mission to Russia, France, and England; member of the State constitutional conventions in 1865, 1868, 1875, 1877, and 1881; professor of metaphysics, social science, and law at the University of Mississippi; elected to the Forty-third and Forty-fourth Congresses (March 4, 1873-March 3, 1877); did not seek renomination in 1876, having been elected Senator; chairman, Committee on Pacific Railroads (Forty-fourth Congress); elected as a Democrat to the United States Senate in 1876; reelected in 1883 and served from March 4, 1877, until March 6, 1885, when he resigned to accept a Cabinet post; chairman, Committee on Interior and Insular Affairs (Forty-sixth Congress), Committee on Railroads (Forty-sixth Congress); Secretary of the Interior in the Cabinet of President Grover Cleveland 1885-1888; appointed by President Cleveland to be Associate Justice of the United States Supreme Court and was confirmed January 16, 1888; served until his death in Vineville, Ga., January 23, 1893; interment in Riverside Cemetery, Macon, Ga.; reinterment in St. Peters Cemetery, Oxford, Miss., in 1894.
Courtesy of Biographical Directory of the United States Congress
Next page