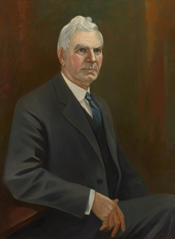 MADDEN, Martin Barnaby, Representative from Illinois; born in Wolviston, England, March 21, 1855; immigrated to the United States with his parents, who settled in Chicago, Ill., in 1860; attended the public schools in Chicago and was graduated from Bryant and Stratton Business College in 1873; was also graduated from an engineering trade school; president of the Quarry Owners Association of the United States 1885-1889; vice president and director of the Builders and Traders Exchange of Chicago in 1886 and 1887; member of the Chicago City Council 1889-1897; served as presiding officer of that body 1891-1893 and chairman of the finance committee for seven years; chairman of the Republican committee of Chicago 1890-1896; president of the Western Stone Co. 1895-1915; director of the Metropolitan Trust & Savings Bank of Chicago 1895-1910; delegate to the Republican National Conventions in 1896, 1900, 1912, 1916 and 1924; unsuccessful candidate for election in 1902 to the Fifty-eighth Congress; elected as a Republican to the Fifty-ninth and to the eleven succeeding Congresses and served from March 4, 1905, until his death; chairman, Committee on Appropriations (Sixty-eighth through Seventieth Congresses); had been nominated for reelection to the Seventy-first Congress; died in the room of the Committee on Appropriations of the House of Representatives, Capitol Building, Washington, D.C., April 27, 1928; interment in Fairview Cemetery, near Hinsdale, Du Page County, Ill.
Courtesy of Biographical Directory of the United States Congress
Next page