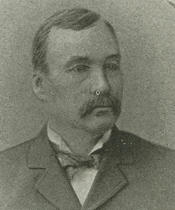 MAHON, Thaddeus Maclay, Representative from Pennsylvania; born in Green Village, Franklin County, Pa., May 21, 1840; pursued an academic course; during the Civil War enlisted as a private in Company A, One Hundred and Twenty-sixth Regiment, Pennsylvania Volunteers, in August 1862; after a term of service in this regiment reenlisted as a veteran in January 1864 in the Twenty-first Regiment, Pennsylvania Volunteer Cavalry, and served until September 1865; studied law; was admitted to the bar in 1871 and commenced practice in southern Pennsylvania; member of the State house of representatives 1870-1872; president of Baltimore & Cumberland Valley Railroad; member of the commission having charge of the soldiers orphan schools of Pennsylvania; unsuccessful candidate for election in 1876 to the Forty-fourth Congress; elected as a Republican to the Fifty-third and to the six succeeding Congresses (March 4, 1893-March 3, 1907); chairman, Committee on War Claims (Fifty-fourth through Fifty-ninth Congresses); was not a candidate for renomination in 1906; engaged in business in Chambersburg, Franklin County, Pa.; died in Scotland, Franklin County, Pa., May 31, 1916; interment in Cedar Grove Cemetery, Chambersburg, Pa.
Courtesy of Biographical Directory of the United States Congress
Next page