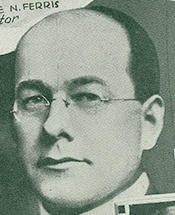 MAPES, Carl Edgar, Representative from Michigan; born on a farm near Kalamo, Eaton County, Mich., December 26, 1874; attended the common schools; was graduated from Olivet (Mich.) College in 1896 and from the law department of the University of Michigan at Ann Arbor in 1899; was admitted to the bar and commenced the practice of law in Grand Rapids, Mich., in 1899; assistant prosecuting attorney of Kent County, Mich., 1900-1904; member of the State house of representatives 1905-1907; unsuccessful candidate for renomination in 1907; member of the State senate 1909-1913; elected as a Republican to the Sixty-third and to the thirteen succeeding Congresses and served from March 4, 1913, until his death; chairman, Committee on District of Columbia (Sixty-sixth Congress); died in New Orleans, La., on December 12, 1939; interment in Oak Hill Cemetery, Grand Rapids, Mich.
Courtesy of Biographical Directory of the United States Congress
Next page