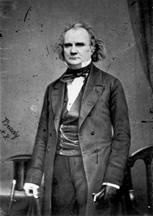 Representative and a Senator from Virginia; born on Analostan Island, Fairfax County, Va. (now Theodore Roosevelt Island, Washington, D.C.), November 3, 1798; studied under a private tutor and at an academy at Georgetown, D.C.; graduated from the University of Pennsylvania at Philadelphia in 1818 and from the law department of William and Mary College at Williamsburg in 1820; admitted to the bar and practiced in Winchester, Va., in 1820 and 1821; delegate to the Virginia constitutional convention in 1829; member, State house of delegates 1826-1832, with the exception of 1827-1828; presidential elector on the Democratic ticket in 1832; elected as a Jackson Democrat to the Twenty-fifth Congress (March 4, 1837-March 3, 1839); elected as a Democrat to the United States Senate in 1847 to fill the vacancy caused by the death of Isaac S. Pennybacker; reelected in 1850 and 1856 and served from January 21, 1847, until March 28, 1861, when he withdrew; expelled from the Senate for support of the rebellion on July 11, 1861; served as President pro tempore of the Senate during the Thirty-fourth and Thirty-fifth Congresses; chairman, Committee on Claims (Thirtieth Congress), Committee on the District of Columbia (Thirty-first Congress), Committee on Foreign Relations (Thirty-second through Thirty-sixth Congresses), Committee on Naval Affairs (Thirty-second Congress); delegate from Virginia to the Provisional Congress of the Confederacy; appointed commissioner of the Confederacy to Great Britain and France and while on his way to his post was taken from the British mail steamer Trent November 8, 1861, and confined in Fort Warren, Boston Harbor; released in January 1862; proceeded to London and represented the Confederacy until its downfall in April 1865; resided in Canada after the close of the war until 1868, when he returned to Virginia; died at "Clarens," near the city of Alexandria, Va, April 28, 1871; interment in Christ Church Episcopal Cemetery, Alexandria, Va.
Courtesy of Biographical Directory of the United States Congress
Next page