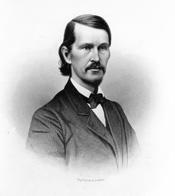 MAYNARD, Horace, Representative from Tennessee; born in Westboro, Worcester County, Mass., August 30, 1814; attended the common schools of Westboro and the Millbury (Mass.) Academy, where he afterward taught, and graduated from Amherst College, Mass., in 1838; professor at the University of East Tennessee 1839-1844; studied law; was admitted to the bar in 1844 and commenced practice in Knoxville, Tenn.; unsuccessful Whig candidate for election to the Thirty-third Congress in 1853; presidential elector on the Whig ticket in 1852 and on the Republican ticket in 1864; elected as an American Party candidate to the Thirty-fifth Congress, as an Opposition Party candidate to the Thirty-sixth Congress, and as a Unionist to the Thirty-seventh Congress (March 4, 1857-March 3, 1863); attorney general of Tennessee 1863-1865; delegate to the Southern Loyalist Convention at Philadelphia in 1866; upon the readmission of the State of Tennessee to representation was elected as an Unconditional Unionist to the Thirty-ninth Congress and reelected as a Republican to the four succeeding Congresses and served from July 24, 1866, to March 3, 1875; chairman, Committee on Banking and Currency (Forty-third Congress); was not a candidate for renomination in 1874; unsuccessful Republican candidate for Governor of Tennessee in 1874; Minister to Turkey from March 9, 1875, until May 1880; appointed Postmaster General in the Cabinet of President Hayes and served from June 2, 1880, to March 5, 1881; died in Knoxville, Tenn., May 3, 1882; interment in Old Gray Cemetery.
Courtesy of Biographical Directory of the United States Congress
Next page