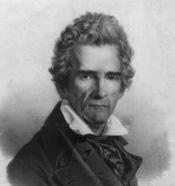 McKAY, James Iver, Representative from North Carolina; born near Elizabethtown, Bladen County, N.C., in 1793; pursued classical studies; studied law; was admitted to the bar and practiced; appointed United States attorney for the district of North Carolina on March 6, 1817; served in the state senate 1815-1819, 1822, 1826, and 1830; elected as a Jacksonian to the Twenty-second through Twenty-fourth Congresses and reelected as a Democrat to the Twenty-fifth through Thirtieth Congresses (March 4, 1831-March 3, 1849); chairman, Committee on Military Affairs (Twenty-fifth Congress), Committee on the Post Office and Post Roads (Twenty-sixth Congress), Committee on Expenditures in the Department of War (Twenty-seventh Congress), Committee on Ways and Means (Twenty-eighth and Twenty-ninth Congresses); died in Goldsboro, Wayne County, N.C., September 4, 1853.
Courtesy of Biographical Directory of the United States Congress
Next page