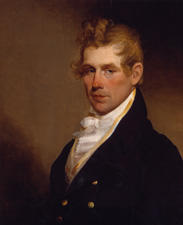 McKINLEY, John, a Senator and Representative from Alabama; born in Culpeper County, Va., May 1, 1780; moved to Kentucky; studied law; admitted to the bar and commenced the practice of his profession in Louisville, Ky.; moved to Huntsville, Madison County, Ala.; member, State house of representatives 1820-1822; elected as a Jacksonian to the United States Senate to fill the vacancy caused by the death of Henry Chambers and served from November 27, 1826, to March 3, 1831; unsuccessful candidate for reelection in 1830; member, State legislature 1831; moved to Florence, Lauderdale County, Ala.; elected as a Jacksonian to the Twenty-third Congress (March 4, 1833-March 3, 1835); did not seek reelection; again a member of the State legislature; again elected to the United States Senate, as a Democrat, for the term beginning March 4, 1837, but resigned April 22, 1837, before qualifying; appointed by President Martin Van Buren as an Associate Justice of the United States Supreme Court in April 1837, and served until his death in Louisville, Ky., July 19, 1852; interment in Cave Hill Cemetery.
Courtesy of Biographical Directory of the United States Congress
Next page