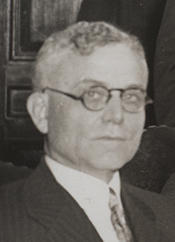 MICHENER, Earl Cory, Representative from Michigan; born near Attica, Seneca County, Ohio, November 30, 1876; moved with his parents to Adrian, Mich., in 1889; attended the public schools of Adrian; during the Spanish-American War served as a private in Company B, Thirty-first Regiment, Michigan Volunteer Infantry, from April 26, 1898, to May 17, 1899; studied law at the University of Michigan at Ann Arbor in 1901 and 1902 and was graduated from the law department of Columbian University (now George Washington University) Washington, D.C., in 1903; was admitted to the bar the same year and commenced practice in Adrian, Mich.; assistant prosecuting attorney for Lenawee County, Mich., 1907-1910; prosecuting attorney 1911-1914; elected as a Republican to the Sixty-sixth and to the six succeeding Congresses (March 4, 1919-March 3, 1933); one of the managers appointed by the House of Representatives in 1926 to conduct the impeachment proceedings against George W. English, judge of the United States District Court for the Eastern District of Illinois; unsuccessful candidate for reelection in 1932 to the Seventy-third Congress; elected to the Seventy-fourth and to the seven succeeding Congresses (January 3, 1935-January 3, 1951); chairman, Committee on Judiciary (Eightieth Congress); was not a candidate for renomination in 1950; maintained law offices in Adrian, Mich., until his death there July 4, 1957; interment in Oakwood Cemetery.
Courtesy of Biographical Directory of the United States Congress
Next page