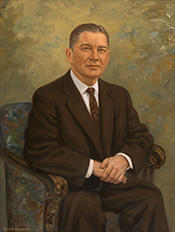 MILLS, Wilbur Daigh, Representative from Arkansas; born in Kensett, White County, Ark., May 24, 1909; attended the public schools; Hendrix College, Conway, Ark., and the law department of Harvard University; was admitted to the bar in 1933 and commenced practice in Searcy, Ark.; served as county and probate judge of White County, Ark., 1934-1938; elected as a Democrat to the Seventy-sixth and to the eighteen succeeding Congresses (January 3, 1939-January 3, 1977); chairman, Committee on Ways and Means (Eighty-fifth through Ninety-third Congresses), Joint Committee on Internal Revenue Taxation (Eighty-sixth through Ninety-third Congresses); was not a candidate for reelection in 1976 to the Ninety-fifth Congress; tax consultant for the Washington office of Shea, Gould, Climenko & Casey, a New York law firm; was a resident of Kensett, Ark., until his death in Searcy, Ark., on May 2, 1992; interment in Kensett Cemetery, Kensett, White County, Ark.
Courtesy of Biographical Directory of the United States Congress
Next page