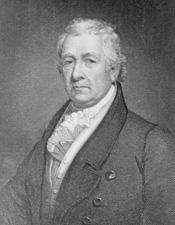 MITCHILL, Samuel Latham, Representative and a Senator from New York; born in Hempstead, Nassau County, N.Y., August 20, 1764; pursued classical studies; studied medicine and graduated from the University of Edinburgh, Scotland, in 1786; returned to the United States, studied law and was admitted to the bar; commissioner to purchase the lands of the Iroquois Indians in western New York in 1788; member, State assembly 1791, 1798; professor of chemistry, botany, and natural history in Columbia College 1792-1801; one of the founders of the State Society for the Promotion of Agriculture in 1793; editor of the New York Medical Repository 1797-1813; elected as a Democratic Republican to the Seventh, Eighth, and Ninth Congresses and served from March 4, 1801, until his resignation November 22, 1804, before the close of the Eighth Congress, having been elected Senator; one of the managers appointed by the House of Representatives in 1804 to conduct the impeachment proceedings against Judge John Pickering; chairman, Committee on Commerce and Manufacturers (Eighth Congress); elected to the United States Senate on November 9, 1804, to fill the vacancy caused by the resignation of John Armstrong, but did not qualify immediately, retaining his seat in the House; served in the Senate from November 23, 1804, to March 3, 1809; elected to the Eleventh Congress to fill the vacancy caused by the resignation of William Denning; reelected to the Twelfth Congress and served from December 4, 1810, to March 3, 1813; surgeon general of the State militia 1818; founder and president of the Lyceum of Natural History of New York City 1817-1823; professor of chemistry and natural history in the New York College of Physicians and Surgeons 1808-1820 and of botany and materia medica 1820-1826; one of the founders and vice president of Rutgers Medical School 1826-1830; died in New York City September 7, 1831; interment in Greenwood Cemetery, Brooklyn, N.Y.
Courtesy of Biographical Directory of the United States Congress
Next page