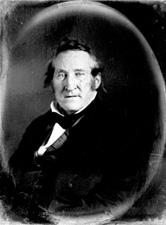 a Senator and Representative from Missouri; born at Harts Mill, near Hillsboro, N.C., March 14, 1782; attended Chapel Hill College (University of North Carolina); admitted to the bar at Nashville, Tenn., in 1806 and commenced practice in Franklin, Williamson County, Tenn.; member, State senate 1809-1811; served as aide-de-camp to General Andrew Jackson; colonel of a regiment of Tennessee volunteers 1812-1813; lieutenant colonel of the Thirty-ninth United States Infantry 1813-1815; moved to St. Louis, Mo., where he edited the Missouri Inquirer and continued the practice of law; upon the admission of Missouri as a State into the Union, was elected in 1821 as a Democratic Republican (later Jacksonian and Democrat) to the United States Senate; reelected in 1827, 1833, 1839, and 1845 and served from August 10, 1821, to March 3, 1851; chairman, Committee on Indian Affairs (Eighteenth through Twentieth Congresses), Committee on Military Affairs (Twentieth through Twenty-sixth and Twenty-ninth and Thirtieth Congresses), Committee on Foreign Relations (Thirtieth Congress); author of the resolution to expunge from the Senate Journal the resolution of censure on Andrew Jackson; unsuccessful candidate for reelection to the Senate in 1850; censure proceedings were initiated against Benton in 1850, arising from an incident of disorderly conduct on the Chamber floor, but the Senate took no action; elected as a Democrat to the Thirty-third Congress (March 4, 1853-March 3, 1855); chairman, Committee on Military Affairs (Thirty-third Congress); unsuccessful candidate for reelection in 1854 to the Thirty-fourth Congress and for Governor of Missouri in 1856; engaged in literary pursuits in Washington, D.C., until his death there on April 10, 1858; interment in Bellefontaine Cemetery, St. Louis, Mo.
Courtesy of Biographical Directory of the United States Congress
Next page