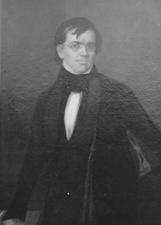 a Senator from Kentucky; born near Shepherdsville, Bullitt County, Ky., May 24, 1797; attended the public schools and Transylvania University, Lexington, Ky.; studied law; admitted to the bar in 1818 and commenced practice in Bowling Green, Ky.; member, State house of representatives 1828-1831; lieutenant governor 1832; upon the Governor's death in 1834, he became Governor and served until 1836; member, State house of representatives 1837-1838; president of the State board of internal improvements 1838-1841; elected as a Whig to the United States Senate and served from March 4, 1841, to March 3, 1847; chairman, Committee on Indian Affairs (Twenty-seventh Congress), Committee on Retrenchment (Twenty-seventh and Twenty-eighth Congresses); continued the practice of law in Covington, Kenton County, Ky., until his death in that city on December 28, 1854; interment in the State lot of Frankfort Cemetery, Frankfort, Ky.
Courtesy of Biographical Directory of the United States Congress
Next page