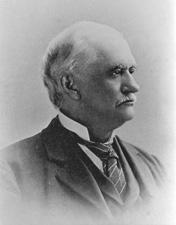 MORGAN, John Tyler, a Senator from Alabama; born in Athens, McMinn County, Tenn., June 20, 1824; moved with his parents to Alabama in 1833 and settled in Calhoun County; attended frontier schools; studied law; admitted to the bar in 1845 and commenced practice in Talladega, Ala.; moved to Dallas County, Ala., in 1855 and resumed the practice of law in Selma and Cahaba; presidential elector on the Democratic ticket in 1860; delegate from Dallas County to the State convention of 1861 which passed the ordinance of secession; during the Civil War enlisted in the Confederate Army in 1861 and rose to brigadier general; after the war resumed the practice of law in Selma, Ala.; presidential elector on the Democratic ticket in 1876; elected as a Democrat to the United States Senate in 1876; reelected in 1882, 1888, 1894, 1900, and 1906, and served from March 4, 1877, until his death; chairman, Committee on Rules (Forty-sixth Congress), Committee on Foreign Relations (Fifty-third Congress), Committee on Interoceanic Canals (Fifty-sixth and Fifty-seventh Congresses), Committee on Public Health and National Quarantine (Fifty-ninth Congress); died in Washington, D.C., June 11, 1907; interment in Live Oak Cemetery, Selma, Dallas County, Ala.
Courtesy of Biographical Directory of the United States Congress
Next page