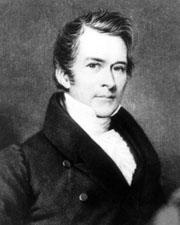 A Senator from Georgia; born at Rocky Hill, near Princeton, N.J., August 23, 1781; moved with his parents to Savannah, Ga., in 1782; graduated from Princeton College in 1796; studied law in Savannah; admitted to the bar and began practice in Louisville, then the capital of Georgia, in 1799; returned to Savannah; elected solicitor of the eastern judicial circuit of Georgia in 1809; judge of the same circuit from 1810 until January 30, 1821, when he resigned; captain of the Georgia Hussars, a Savannah volunteer company, in the War of 1812; member, State senate 1822-1823; elected as a Jacksonian to the United States Senate and served from March 4, 1825, until March 9, 1829; resigned to accept the position of Attorney General in the Cabinet of President Andrew Jackson and served from March 9, 1829, until June 22, 1831, when he resigned; resumed the practice of law; again elected, as a Whig, to the United States Senate and served from March 4, 1841, until May 1845, when he again resigned to accept an appointment to the supreme court of Georgia; again elected in 1845 to the United States Senate to fill the vacancy caused by his second resignation, and served from November 14, 1845, until March 3, 1847, when his term expired; again elected in 1847 to the same United States Senate seat and served from November 13, 1847 to May 28, 1852, when he resigned for the third time; chairman, Committee on Judiciary (Twentieth, Twenty-sixth, and Twenty-seventh Congresses); president of the American Party convention at Milledgeville in 1855; died in Savannah, Ga., January 1, 1856; interment in Laurel Grove Cemetery.
Courtesy of Biographical Directory of the United States Congress
Next page