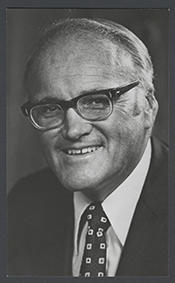 O'HARA, James Grant, Representative from Michigan; born in Washington, D.C., November 8, 1925; moved with his parents to Michigan, in 1939; graduated from University of Detroit High School in 1943; during the Second World War served as an enlisted man in the United States Army with Company B, Five Hundred and Eleventh Parachute Infantry Regiment, Eleventh Airborne Division, seeing action in the Pacific Theater of Operations; graduated from the University of Michigan in 1954 and from the law department of the same university in 1955; was admitted to the bar in 1955 and commenced the practice of law in Detroit and Macomb County, Mich.; delegate, Democratic National Conventions, 1960 and 1968; elected as a Democrat to the Eighty-sixth and to the eight succeeding Congresses (January 3, 1959-January 3, 1977); was not a candidate in 1976 for reelection but was an unsuccessful candidate for nomination to the United States Senate; resumed the practice of law in Washington, D.C.; member, and later chairman, Federal Minimum Wage Study Commission, 1978-1981; was a resident of Alexandria, Va., until his death in Washington, D.C., on March 13, 1989: interment in Arlington National Cemetery.
Courtesy of Biographical Directory of the United States Congress
Next page