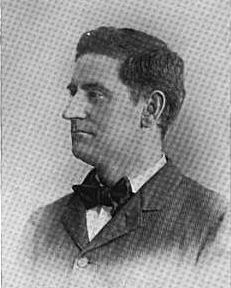 A Representative from Massachusetts; born in Fall River, Bristol County, Mass., March 23, 1853; moved with his parents to Boston in 1854; attended the common schools; graduated from Quincy Grammar School, Boston; ten years at the carpenter's trade; member of the Boston school committee 1874-1877; member of the State house of representatives 1878-1882 and in 1884; member of the board of directors for public institutions from 1880 to 1886 and was chairman of the board the last eighteen months; city clerk of Boston in 1887 and 1888; elected as a Democrat to the Fifty-first, Fifty-second, and Fifty-third Congresses (March 4, 1889-March 3, 1895); unsuccessful candidate for renomination in 1894; assistant treasurer of the United States at Boston by appointment of President Cleveland 1895-1899; organized the Federal Trust Co., of Boston, in 1899 and served as its president until 1922, when it merged into the Federal National Bank, and then served as chairman of the board of directors until his death; member of the board of sinking fund commissioners 1899-1909; delegate to the Democratic National Convention in 1916; died in Boston, Mass., February 19, 1935; interment in Holyhood Cemetery, Brookline, Mass.
Courtesy of Biographical Directory of the United States Congress
Next page