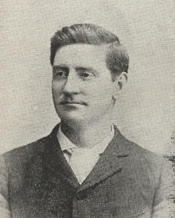 O'NEILL, Charles, Representative from Pennsylvania; born in Philadelphia, Pa., March 21, 1821; was graduated from Dickinson College, Carlisle, Pa., in 1840; studied law; was admitted to the bar in 1843 and commenced practice in Philadelphia; member of the State house of representatives 1850-1852 and in 1860; served in the State senate in 1853; elected as a Republican to the Thirty-eighth and to the three succeeding Congresses (March 4, 1863-March 3, 1871); unsuccessful candidate for reelection in 1870 to the Forty-second Congress; elected to the Forty-third and to the ten succeeding Congresses and served from March 4, 1873, until his death in Philadelphia, Pa., on November 25, 1893; interment in West Laurel Hill Cemetery, Montgomery County, Pa.
Courtesy of Biographical Directory of the United States Congress
Next page