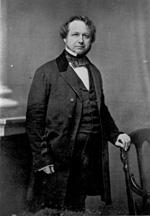 BIGLER, William, a Senator from Pennsylvania; born in Cumberland County (now Spring Township, Perry County), Pa., on January 1, 1814; attended the public schools and was tutored by older brother John Bigler; in 1829 was apprenticed to the printing trade; moved to Clearfield, Clearfield County, Pa., in 1833 and established the Clearfield Democrat; engaged in the lumber business; member, State senate 1841-1847, twice serving as speaker; elected Governor in 1851 and served one term; president, Philadelphia and Erie Railroad; elected as a Democrat to the United States Senate to fill the vacancy in the term commencing March 4, 1855, caused by failure of the legislature to elect and served from January 14, 1856, to March 3, 1861; unsuccessful candidate for reelection; chairman, Committee on Engrossed Bills (Thirty-sixth Congress), Committee on Patents and Patent Office (Thirty-sixth Congress), Committee on Commerce (Thirty-sixth Congress); member of the constitutional convention of Pennsylvania, 1873; member of the board of finance of the Centennial Exposition in 1876; died in Clearfield, Pa., August 9, 1880; interment in Hillcrest Cemetery.
Courtesy of Biographical Directory of the United States Congress
Next page