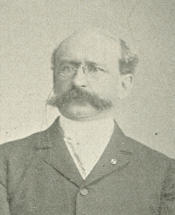 Representative from Pennsylvania; born in Philadelphia, Pa., December 4, 1841; was graduated from Jefferson College, Canonsburg, Pa., in 1862 and from the law department of Washington and Jefferson College, Washington, Pa.; during the Civil War entered the Union Army as a first lieutenant in the One Hundred and Fortieth Regiment, Pennsylvania Volunteer Infantry, August 22, 1862; commissioned captain September 9, 1862; major and judge advocate September 20, 1864; brevetted major of Volunteers August 1, 1864; brevetted lieutenant colonel of Volunteers April 9, 1865; colonel and brigadier general of Volunteers April 9, 1865; honorably mustered out of service July 2, 1866; awarded a Congressional Medal of Honor August 26, 1893, for actions at the Battle of the Wilderness, Virginia, May 6, 1864; appointed postmaster of Philadelphia in March 1867 and served until December 1872, when he resigned to accept the clerkship of the courts of oyer and terminer and quarter sessions of the peace in Philadelphia, having been elected by the people; reelected clerk of courts in 1875; delegate to the Republican National Conventions 1872-1900; elected as a Republican to the Forty-sixth and to the sixteen succeeding Congresses and served from March 4, 1879, until his death in Philadelphia March 22, 1912; chairman, Committee on the Post Office and Post Roads (Forty-seventh and Fifty-first Congresses), Committee on Expenditures in the Post Office Department (Fifty-fourth Congress); interment in Laurel Hill Cemetery.
Courtesy of Biographical Directory of the United States Congress
Next page