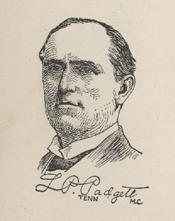 PADGETT, Lemuel Phillips, Representative from Tennessee; born in Columbia, Maury County, Tenn., November 28, 1855; attended private schools in the county, and was graduated from Erskine College, Due West, S.C., in 1876; began the study of law in September 1876; was admitted to the bar in March 1877 and commenced practice in Columbia, Tenn., in January 1879; member of the State senate, 1899-1901; elected as a Democrat to the Fifty-seventh and to the ten succeeding Congresses and served from March 4, 1901, until his death in Washington, D.C., August 2, 1922; chairman, Committee on Naval Affairs (Sixty-second through Sixty-fifth Congresses); interment in Rose Hill Cemetery, Columbia, Tenn.
Courtesy of Biographical Directory of the United States Congress
Next page