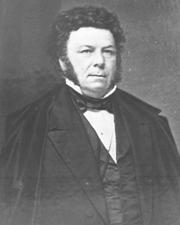 PEARCE, James Alfred, Representative and a Senator from Maryland; born in Alexandria, Va., December 14, 1805; attended a private academy in Alexandria; graduated from the College of New Jersey (now Princeton University) in 1822; studied law; admitted to the bar and commenced practice in Cambridge, Dorchester County, Md., in 1824; moved to Louisiana in 1825 and engaged in sugar planting; returned to Maryland and settled in Kent County in 1828; resumed the practice of law in Chestertown; member, State house of delegates 1831-1835; elected as a Whig to the Twenty-fourth and Twenty-fifth Congresses (March 4, 1835-March 3, 1839); unsuccessful candidate for reelection in 1838 to the Twenty-sixth Congress; elected to the Twenty-seventh Congress (March 4, 1841-March 3, 1843); elected as a Whig to the United States Senate in 1843; reelected in 1849, 1855, and 1861, the last time as a Democrat, and served from March 4, 1843, until his death; chairman, Committee on the Library (Twenty-ninth through Thirty-seventh Congresses); chairman, Committee on Finance (Thirty-sixth Congress); died in Chestertown, Md., on December 20, 1862; interment in New Chester Cemetery.
Courtesy of Biographical Directory of the United States Congress
Next page