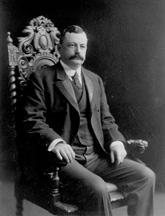 PENROSE, Boies, a Senator from Pennsylvania; born in Philadelphia, Pa., November 1, 1860; attended the public schools and was prepared for college by private tutors; graduated from Harvard University in 1881; studied law; admitted to the bar in 1883 and commenced practice in Philadelphia; member, State house of representatives 1884-1886; member, State senate 1886-1897, when he resigned, having been elected United States Senator; president pro tempore of the State senate 1889-1891; unsuccessful candidate for mayor of Philadelphia 1895; elected as a Republican to the United States Senate in 1897; reelected in 1903, 1909, 1914 and 1920 and served from March 4, 1897, until his death; chairman, Committee on Immigration (Fifty-sixth and Fifty-seventh Congresses), Committee on Post Office and Post Roads (Fifty-eighth through Sixty-first Congresses), Committee on Education and Labor (Fifty-ninth Congress), Committee on Finance (Sixty-second, Sixty-sixth and Sixty-seventh Congresses), Committee on Additional Accommodations for the Library (Sixty-third through Sixty-fifth Congresses); elected a member of the Republican National Committee in 1904 and reelected in 1908; died in Washington, D.C., December 31, 1921; interment in Laurel Hill Cemetery, Philadelphia, Pa.
Courtesy of Biographical Directory of the United States Congress
Next page