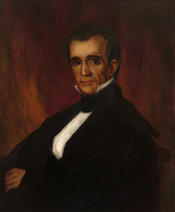 POLK, James Knox, (brother of William Hawkins Polk), Representative from Tennessee and 11th President of the United States; born near Little Sugar Creek, Mecklenburg County, N.C., November 2, 1795; moved to Tennessee in 1806 with his parents, who settled in what later became Maury County; attended the common schools and was tutored privately; graduated from the University of North Carolina at Chapel Hill in 1818; studied law; admitted to the bar in 1820 and commenced practice in Columbia, Tenn.; chief clerk of the state senate 1821-1823; member of the state house of representatives 1823-1825; elected as a Jacksonian to the Nineteenth through the Twenty-fourth Congresses and reelected as a Democrat to the Twenty-fifth Congress (March 4, 1825-March 3, 1839); chairman, Committee on Ways and Means (Twenty-third Congress); Speaker of the House of Representatives (Twenty-fourth and Twenty-fifth Congresses); did not seek renomination in 1838 having become a candidate for governor; governor of Tennessee 1839-1841; elected as a Democrat as President of the United States in 1844; inaugurated on March 4, 1845, and served until March 3, 1849; declined to be a candidate for renomination; died in Nashville, Tenn., June 15, 1849; interment within the grounds of the state capitol.
Courtesy of Biographical Directory of the United States Congress
Notice: By custom, the Speaker of the House rarely votes. Votes for POLK, James Knox may appear to be missing as a result.
Next page