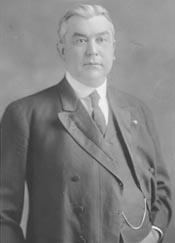 BLACKMON, Fred Leonard, Representative from Alabama; born at Lime Branch, Polk County, Ga., September 15, 1873; moved with his parents to Calhoun County, Ala., in 1883; attended the public schools in Dearmanville and Choccolocco, the State normal college at Jacksonville, Ala., Douglasville (Ga.) College, and Mountain City Business College, Chattanooga, Tenn.; was graduated from the law department of the University of Alabama at Tuscaloosa in 1894; was admitted to the bar in the same year and commenced practice in Anniston, Calhoun County, Ala.; city attorney for Anniston 1898-1902; member of the State senate 1900-1910; chairman of the congressional committee for the fourth Alabama district from 1906 until 1910, when he resigned; elected as a Democrat to the Sixty-second and to the four succeeding Congresses and served from March 4, 1911; had also been reelected to the Sixty-seventh Congress; died in Bartow, Polk County, Fla., on February 8, 1921; interment in the Hillside Cemetery, Anniston, Ala.
Courtesy of Biographical Directory of the United States Congress
Next page