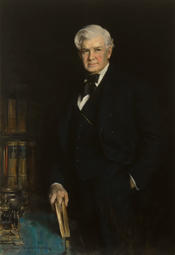 RAINEY, Henry Thomas, Representative from Illinois; born in Carrollton, Greene County, Ill., on August 20, 1860; attended the public schools and Knox Academy and Knox College, Galesburg, Ill.; was graduated from Amherst (Mass.) College in 1883 and from the Union College of Law, Chicago, Ill., in 1885; was admitted to the bar in 1885 and commenced practice in Carrollton, Ill.; master in chancery for Greene County, Ill., from 1887 to 1895, when he resigned; elected as a Democrat to the Fifty-eighth and to the eight succeeding Congresses (March 4, 1903-March 3, 1921); unsuccessfully contested the election of Guy L. Shaw to the Sixty-seventh Congress; engaged in agricultural pursuits; elected to the Sixty-eighth and to the five succeeding Congresses and served from March 4, 1923, until his death; majority leader (Seventy-second Congress), Speaker of the House of Representatives (Seventy-third Congress); died in St. Louis, Mo., on August 19, 1934; interment in the Carrollton Cemetery, Carrollton, Ill.
Courtesy of Biographical Directory of the United States Congress
Notice: By custom, the Speaker of the House rarely votes. Votes for RAINEY, Henry Thomas may appear to be missing as a result.
Next page