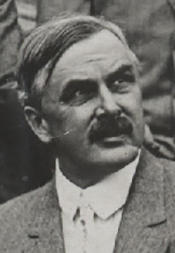 RAKER, John Edward, Representative from California; born near Knoxville, Knox County, Ill., February 22, 1863; moved with his parents to Lassen County, Calif., in 1873; attended the public schools and the State normal school at San Jose 1882-1884; studied law; was admitted to the bar in 1885 and commenced practice in Susanville; moved to Alturas December 6, 1886; district attorney of Modoc County 1895-1899; judge of the superior court of Modoc County from January 5, 1903, to December 19, 1910, when he resigned; chairman of the Democratic State central committee 1908-1910; delegate to the Democratic National Convention at Denver in 1908; elected as a Democrat to the Sixty-second and to the seven succeeding Congresses and served from March 4, 1911, until his death in Washington, D.C., January 22, 1926; chairman, Committee on Expenditures in the Department of Justice (Sixty-fifth Congress), Committee on Woman Suffrage (Sixty-fifth Congress); interment in Susanville Cemetery, Susanville, Calif.
Courtesy of Biographical Directory of the United States Congress
Next page