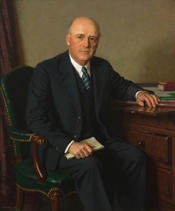 Representative from Texas; born near Kingston, Roane County, Tenn., January 6, 1882; moved to Fannin County, Tex., in 1887 with his parents who settled near Windom; attended the rural schools and was graduated from the East Texas Normal College, Commerce, Tex., in 1903; studied law at the University of Texas at Austin; was admitted to the bar in 1908 and commenced practice in Bonham, Fannin County, Tex.; member of the State house of representatives 1907-1913, and served as speaker during the last two years; elected as a Democrat to the Sixty-third and to the twenty-four succeeding Congresses and served from March 4, 1913, until his death; chairman, Committee on Interstate and Foreign Commerce (Seventy-second, Seventy-third, and Seventy-fourth Congresses); majority leader (Seventy-fifth and Seventy-sixth Congresses), minority leader (Eightieth and Eighty-third Congresses); elected Speaker of the House of Representatives September 16, 1940, to fill the vacancy caused by the death of Speaker William B. Bankhead; reelected Speaker in the Seventy-seventh, Seventy-eighth, Seventy-ninth, Eighty-first, Eighty-second, Eighty-fourth, Eighty-fifth, Eighty-sixth, and Eighty-seventh Congresses; died in Bonham, Tex., November 16, 1961; interment in Willow Wild Cemetery.
Courtesy of Biographical Directory of the United States Congress
Notice: By custom, the Speaker of the House rarely votes. Votes for RAYBURN, Samuel Taliaferro may appear to be missing as a result.
Next page