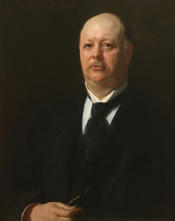 REED, Thomas Brackett, Representative from Maine; born in Portland, Cumberland County, Maine, October 18, 1839; attended the public schools; was graduated from Bowdoin College, Brunswick, Maine, in 1860; studied law; acting assistant paymaster, United States Navy, from April 19, 1864, to November 4, 1865; was admitted to the bar in 1865 and commenced practice in Portland, Maine; member of the State house of representatives in 1868 and 1869; served in the State senate in 1870; attorney general of Maine 1870-1872; city solicitor of Portland 1874-1877; elected as a Republican to the Forty-fifth and to the eleven succeeding Congresses and served from March 4, 1877, to September 4, 1899, when he resigned; chairman, Committee on the Judiciary (Forty-seventh Congress), Committee on Rules (Fifty-first, Fifty-fourth, and Fifty-fifth Congresses); Speaker of the House of Representatives (Fifty-first, Fifty-fourth, and Fifty-fifth Congresses); moved to New York City and engaged in the practice of his profession; died in Washington, D.C., on December 7, 1902; interment in Evergreen Cemetery, Portland, Maine.
Courtesy of Biographical Directory of the United States Congress
Notice: By custom, the Speaker of the House rarely votes. Votes for REED, Thomas Brackett may appear to be missing as a result.
Next page