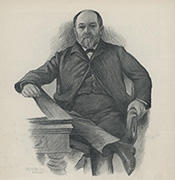 Representative from Missouri; born near Hartford, Ohio County, Ky., August 19, 1835; received an academic education; moved to Missouri in 1855, thence to California, and later to that portion of Utah which is now the State of Nevada; taught school for several years; studied law; was admitted to the bar and commenced practice in Virginia City; also interested in mining; treasurer of Carson County from 1860 until the organization of the State government of Nevada; returned to Missouri in 1865 and continued the practice of law in Rolla; moved to Lebanon, Laclede County, in August 1869; elected as a Democrat to the Forty-third and to the ten succeeding Congresses (March 4, 1873-March 3, 1895); chairman, Committee on Mines and Mining (Forty-fourth Congress), Committee on Coinage, Weights, and Measures (Forty-eighth through Fiftieth Congresses and Fifty-second and Fifty-third Congresses); sponsor of the Bland-Allison silver purchase act of 1878; unsuccessful candidate for reelection in 1894 to the Fifty-fourth Congress; elected to the Fifty-fifth and Fifty-sixth Congresses and served from March 4, 1897, until his death; in 1896 was a prominent candidate for the Democratic nomination for President, receiving two hundred and ninety votes; died in Lebanon, Mo., June 15, 1899; interment in Lebanon Cemetery.
Courtesy of Biographical Directory of the United States Congress
Next page