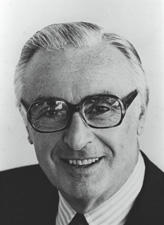 RIBICOFF, Abraham Alexander, Representative and a Senator from Connecticut; born in New Britain, Hartford County, Conn., April 9, 1910; attended the public schools and New York University; graduated from the University of Chicago Law School in 1933 and was admitted to the bar the same year; member, Connecticut legislature 1938-1942; judge of Hartford Police Court 1941-1943, 1945-1947; chairman, assembly of municipal court judges for the State of Connecticut 1941-1942; member of the Charter Revision Commission of the city of Hartford 1945-1946; hearing examiner, Connecticut Fair Employment Practices Act 1937-1939; elected as a Democrat to the Eighty-first and Eighty-second Congresses (January 3, 1949-January 3, 1953); was not a candidate for renomination in 1952 and was unsuccessful for election to fill a vacancy in the United States Senate; Governor of Connecticut 1955-1961, when he was sworn in as Secretary of the Department of Health, Education, and Welfare in the Cabinet of President John F. Kennedy; elected to the United States Senate in 1962; reelected in 1968 and 1974 and served from January 3, 1963, to January 3, 1981; was not a candidate for reelection in 1980; chairman, Committee on Government Operations (Ninety-fourth and Ninety-fifth Congresses), Committee on Governmental Affairs (Ninety-fifth and Ninety-sixth Congresses); practiced law in New York City and resided in Cornwall Bridge, Conn. Died in New York City on February 22, 1998; interment at Cornwall Cemetery, Cornwall, Conn.
Courtesy of Biographical Directory of the United States Congress
Next page