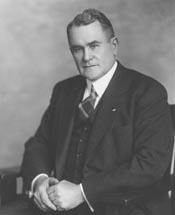 BLANTON, Thomas Lindsay, Representative from Texas; born in Houston, Harris County, Tex., October 25, 1872; educated in the public schools; was graduated from the law department of the University of Texas at Austin in 1897, with three years in the academic department; was admitted to the bar in 1897 and commenced practice in Cleburne, Tex.; moved to Albany, Tex., and continued the practice of law until 1908, when he was elected judge of the forty-second judicial district of Texas; reelected in 1912 and served in that capacity from 1908 until elected to Congress; elected as a Democrat to the Sixty-fifth and to the five succeeding Congresses (March 4, 1917-March 3, 1929); censured by the House of Representatives on October 24, 1921, for abuse of leave to print; was not a candidate for renomination in 1928 but was an unsuccessful candidate for nomination to the United States Senate; subsequently elected on May 20, 1930, to the Seventy-first Congress to fill the vacancy caused by the death of Robert Q. Lee; reelected to the Seventy-second, Seventy-third, and Seventy-fourth Congresses and served from May 20, 1930, to January 3, 1937; unsuccessful candidate for renomination in 1936; engaged in the practice of law in Washington, D.C., in 1937 and 1938; returned to Albany, Tex., in 1938, and continued practicing law; also engaged in the raising of Hereford cattle; died in Albany, Tex., August 11, 1957; interment in Albany Cemetery.
Courtesy of Biographical Directory of the United States Congress
Next page