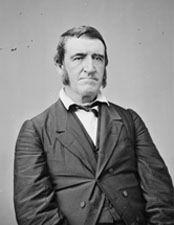 RICHARDSON, William Alexander, Representative and a Senator from Illinois; born near Lexington, Fayette County, Ky., January 16, 1811; attended an academy at Walnut Hill, Ky., Centre College at Danville, Ky., and Transylvania University at Lexington, Ky.; taught school; studied law; admitted to the bar in 1831 and commenced practice in Shelbyville, Ill.; States attorney 1834-1835; member, State house of representatives 1836-1838, 1844-1846, and served as speaker in 1844; member, State senate 1838-1842; presidential elector on the Democratic ticket in 1844; during the Mexican War enlisted as a captain and was promoted to the rank of major; moved to Quincy, Ill., in 1849; elected as a Democrat to the Thirtieth Congress to fill the vacancy caused by the resignation of Stephen A. Douglas; reelected to the Thirty-first and to the three succeeding Congresses and served from December 6, 1847, to August 25, 1856, when he resigned; chairman, Committee on Territories (Thirty-second and Thirty-third Congresses); elected to the Thirty-seventh Congress and served from March 4, 1861, until his resignation on January 29, 1863, having previously been elected Senator; elected as a Democrat to the United States Senate in 1863 to fill the vacancy caused by the death of Stephen A. Douglas and served from January 30, 1863, to March 3, 1865; was not a candidate for renomination in 1864; engaged in newspaper work; died in Quincy, Adams County, Ill., December 27, 1875; interment in Woodland Cemetery.
Courtesy of Biographical Directory of the United States Congress
Next page