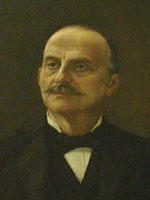 ROBINSON, George Dexter, Representative from Massachusetts; born in Lexington, Mass., January 20, 1834; attended Lexington Academy and Hopkins Classical School, Cambridge, Mass., and was graduated from Harvard University in 1856; principal teacher at the Chicopee High School 1856-1865; studied law; was admitted to the bar in Cambridge, Mass., in 1866 and commenced practice in Chicopee, Hampden County, Mass.; member of the State house of representatives in 1874; served in the State senate in 1876; elected as a Republican to the Forty-fifth and to the three succeeding Congresses and served from March 4, 1877, to January 7, 1884, when he resigned, having been elected Governor; Governor of Massachusetts 1884-1887; resumed the practice of his profession in Springfield, Mass.; died in Chicopee, Mass., February 22, 1896; interment in Fairview Cemetery.
Courtesy of Biographical Directory of the United States Congress
Next page