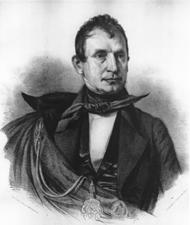 ROBINSON, John McCracken, a Senator from Illinois; born near Georgetown, Scott County, Ky., April 10, 1794; attended the common schools and graduated from Transylvania University at Lexington, Ky.; studied law; admitted to the bar and began practice in Carmi, Ill., in 1818; judge of the State supreme court; served as general in the State militia; elected in 1830 as a Jacksonian (later Democrat) to the United States Senate to fill the vacancy caused by the death of John McLean; reelected in 1835 and served from December 11, 1830, to March 3, 1841; was not a candidate for reelection; chairman, Committee on Engrossed Bills (Twenty-second Congress), Committee on Militia (Twenty-second through Twenty-fourth Congresses), Committee on Post Office and Post Roads (Twenty-fourth through Twenty-sixth Congresses); elected an associate justice of the Illinois State supreme court in 1843 and served until his death two months later in Ottawa, Ill., April 25, 1843; interment in the Old Graveyard, Carmi, Ill.
Courtesy of Biographical Directory of the United States Congress
Next page