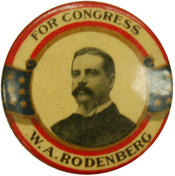 RODENBERG, William August, Representative from Illinois; born near Chester, Randolph County, Ill., October 30, 1865; attended the public schools; was graduated from Central Wesleyan College, Warrenton, Mo., in 1884; taught for seven years; attended the St. Louis Law School; was admitted to the bar in 1893 and commenced practice in East St. Louis, St. Clair County, Ill.; delegate to the Republican National Conventions in 1896, 1908, 1916, and 1920; elected as a Republican to the Fifty-sixth Congress (March 4, 1899-March 3, 1901); unsuccessful candidate for reelection in 1900 to the Fifty-seventh Congress; appointed a member of the United States Civil Service Commission by President McKinley March 25, 1901, and served until April 1, 1902, when he resigned; resumed the practice of law in East St. Louis, also financially interested in various business enterprises; elected to the Fifty-eighth and to the four succeeding Congresses (March 4, 1903-March 3, 1913); chairman, Committee on Industrial Arts and Expositions (Sixty-first Congress); unsuccessful candidate for reelection in 1912 to the Sixty-third Congress; elected to the Sixty-fourth and to the three succeeding Congresses (March 4, 1915-March 3, 1923); chairman, Committee on Flood Control (Sixty-sixth and Sixty-seventh Congresses); engaged in the practice of law in Washington, D.C.; died in Alpena, Mich., while on a visit, September 10, 1937; interment in Rock Creek Cemetery, Washington, D.C.
Courtesy of Biographical Directory of the United States Congress
Next page