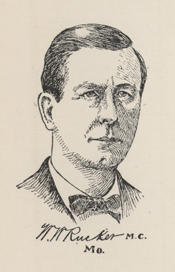 RUCKER, William Waller, Representative from Missouri; born near Covington, Alleghany County, Va., February 1, 1855; moved with his parents to western Virginia in 1861; attended the common schools; moved to Chariton County, Mo., in 1873; engaged in teaching in the district schools; studied law; was admitted to the bar in 1876 and commenced practice in Keytesville, Chariton County, Mo.; prosecuting attorney of Chariton County 1886-1892; judge of the twelfth circuit 1892-1899; elected as a Democrat to the Fifty-sixth and to the eleven succeeding Congresses (March 4, 1899-March 3, 1923); chairman, Committee on Election of President, Vice President, and Representatives (Sixty-second through Sixty-fifth Congresses); unsuccessful candidate for reelection in 1922 to the Sixty-eighth Congress; resumed the practice of law in Keytesville, Mo.; also engaged in agricultural pursuits; died in Keytesville, Mo., May 30, 1936; interment in the City Cemetery.
Courtesy of Biographical Directory of the United States Congress
Next page