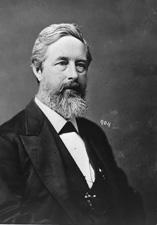 SARGENT, Aaron Augustus, Representative and a Senator from California; born in Newburyport, Essex County, Mass., September 28, 1827; attended the common schools; apprenticed to a cabinetmaker; worked as a printer in Philadelphia, Pa.; moved to Washington, D.C., in 1847 and became secretary to a Member of Congress; moved to California in 1849 and settled in Nevada City in 1850; employed on the staff of the Nevada Daily Journal and later became owner of the paper; studied law; admitted to the bar in 1854 and commenced practice in Nevada City, Calif.; district attorney for Nevada County 1855-1856; member, State senate 1856; elected as a Republican to the Thirty-seventh Congress (March 4, 1861-March 3, 1863); declined to be a candidate for renomination in 1862; elected as a Republican to the Forty-first and Forty-second Congresses (March 4, 1869-March 3, 1873); was not a candidate for renomination in 1872, having become a candidate for United States Senator; elected as a Republican to the United States Senate and served from March 4, 1873, to March 3, 1879; was not a candidate for reelection; chairman, Committee on Mines and Mining (Forty-fourth Congress), Committee on Naval Affairs (Forty-fifth Congress); engaged in the practice of law in San Francisco 1879-1882; Minister to Germany 1882-1884, when he resigned; declined to accept the appointment of Minister to Russia; returned to California in 1884 and resumed the practice of law; unsuccessful candidate for the Republican nomination for Senator in 1885; died in San Francisco, Calif., August 14, 1887; interment in Laurel Hill Cemetery; reinterred on July 3, 1949 in Pioneer Cemetery, Nevada City, Calif.
Courtesy of Biographical Directory of the United States Congress
Next page