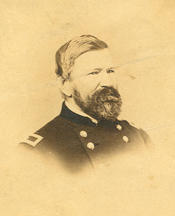 SCHENCK, Robert Cumming, Representative from Ohio; born in Franklin, Ohio, October 4, 1809; attended the rural schools and was graduated from Miami University, Oxford, Ohio, in 1827; became a professor in that university 1827-1829; studied law; was admitted to the bar in 1833 and commenced practice in Dayton, Ohio; member of the State house of representatives 1839-1843; elected as a Whig to the Twenty-eighth and to the three succeeding Congresses (March 4, 1843-March 3, 1851); chairman, Committee on Roads and Canals (Thirtieth Congress); was not a candidate for renomination; Minister to Brazil and also accredited to Uruguay, Argentine Confederation, and Paraguay, 1851-1853; entered the Union Army May 17, 1861, and served as brigadier general of Volunteers; promoted to major general September 18, 1862, to date from August 30, 1862; resigned his commission in the Army on December 3, 1863, to take his seat in Congress; elected as a Republican to the Thirty-eighth and to the three succeeding Congresses and served from March 4, 1863, to January 5, 1871, when he resigned to accept a position in the diplomatic service; chairman, Committee on Military Affairs (Thirty-eighth and Thirty-ninth Congresses), Committee on Ways and Means (Fortieth and Forty-first Congresses); unsuccessful candidate for reelection in 1870 to the Forty-second Congress; Minister to Great Britain from December 1870 until March 1876, when he resigned; delegate to the Philadelphia Loyalist Convention in 1866; member of the Alabama Claims Commission in 1871; resumed the practice of law in Washington, D.C., where he died March 23, 1890; interment in Woodland Cemetery, Dayton, Ohio.
Courtesy of Biographical Directory of the United States Congress
Next page