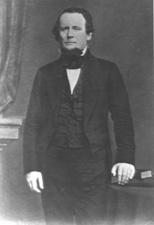 A Senator from Arkansas; born in Centerville, Hickman County, Tenn., in 1812; graduated from Columbia College, Tennessee, about 1834; studied law; admitted to the bar and commenced practice in Helena, Ark., in 1835; later became a cotton planter; prosecuting attorney 1835-1837; circuit judge 1840-1843; associate justice of the State supreme court 1843-1845; member and president of the State senate 1846-1847; presidential elector on the Democratic ticket in 1846; appointed in 1848 and subsequently elected as a Democrat to the United States Senate to fill the vacancy caused by the death of Chester Ashley; reelected in 1853 and 1859 and served from May 12, 1848, to July 11, 1861, when he was expelled for support of the rebellion; chairman, Committee on Manufactures (Thirty-first and Thirty-second Congresses), Committee on Indian Affairs (Thirty-third through Thirty-sixth Congresses); returned to Helena, Ark., where he resided during the Civil War and practiced law; after federal troops occupied Helena, Ark., moved to Memphis, Tenn., in 1864 and resumed the practice of law; died in Memphis, Tenn., May 20, 1865; interment near Helena, Ark., in the Dunn Family burying ground; in 1877, the Senate revoked the resolution of expulsion and paid the full amount of compensation to Sebastian's children.
Courtesy of Biographical Directory of the United States Congress
Next page