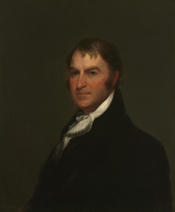 SEDGWICK, Theodore, a Delegate, Representative, and a Senator from Massachusetts; born in West Hartford, Conn., May 9, 1746; attended Yale College; studied theology and law; admitted to the bar in 1766 and commenced practice in Great Barrington, Mass.; moved to Sheffield, Mass.; during the Revolutionary War served in the expedition against Canada in 1776; member, State house of representatives 1780, 1782-1783; member, State senate 1784-1785; Member of the Continental Congress 1785, 1786, and 1788; member, State house of representatives 1787-1788, and served as speaker; delegate to the State convention that adopted the Federal Constitution in 1788; elected to the First and to the three succeeding Congresses and served from March 4, 1789, until his resignation in June 1796; elected as a Federalist to the United States Senate to fill the vacancy caused by the resignation of Caleb Strong and served from June 11, 1796, to March 3, 1799; served as President pro tempore of the Senate during the Fifth Congress; elected to the Sixth Congress (March 4, 1799-March 3, 1801); Speaker of the House of Representatives, Sixth Congress; judge of the supreme court of Massachusetts 1802-1813; died in Boston, Mass., January 24, 1813; interment in the family cemetery, Stockbridge, Mass.
Courtesy of Biographical Directory of the United States Congress
Notice: By custom, the Speaker of the House rarely votes. Votes for SEDGWICK, Theodore may appear to be missing as a result.
Next page