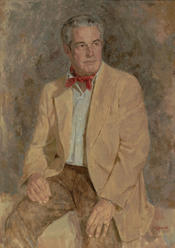 BOLLING, Richard Walker, (great-great-grandson of John Williams Walker and great-great-nephew of Percy Walker), Representative from Missouri; born in New York City, May 17, 1916; attended grade schools and Phillips Exeter Academy, Exeter, N.H.; at the age of fifteen, upon his fathers death, returned to his home in Huntsville, Ala.; B.A., 1937, M.A., 1939, University of the South, Sewanee, Tenn.; graduate studies, Vanderbilt University, Nashville, Tenn., 1939-1940; taught at Sewanee Military Academy in 1938 and 1939; served as assistant to the head of the Department of Education, Florence State Teachers College, in Alabama, in 1940; educational administrator by profession; entered the United States Army as a private in April 1941, and served until discharged as a lieutenant colonel in July 1946, with four years overseas service in Australia, New Guinea, Philippines, and in Japan as assistant to chief of staff to General MacArthur; awarded the Legion of Merit and Bronze Star Medal; veterans adviser at the University of Kansas City in 1946 and 1947; elected as a Democrat to the Eighty-first and to the sixteen succeeding Congresses (January 3, 1949-January 3, 1983); chairman, Select Committee on Committees of the House (Ninety-third Congress), Joint Economic Committee (Ninety-fifth Congress); Committee on Rules (Ninety-sixth and Ninety-seventh Congresses); was not a candidate for reelection in 1982 to the Ninety-eighth Congress; was a resident of Washington, D.C., until his death there on April 21, 1991.
Courtesy of Biographical Directory of the United States Congress
Next page