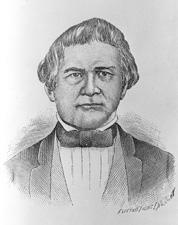 SEVIER, Ambrose Hundley, (cousin of Henry Wharton Conway), a Delegate and a Senator from Arkansas; born in Greene County, Tenn., November 4, 1801; completed preparatory studies; moved to Missouri in 1820 and to Little Rock, Ark., in 1821; clerk of the Territorial house of representatives; studied law; admitted to the bar in 1823 and practiced; member, Territorial house of representatives 1823-1827, serving as speaker in 1827; elected as a Delegate to the Twentieth Congress to fill the vacancy caused by the death of Henry W. Conway; reelected to the Twenty-first and to the three succeeding Congresses and served from February 13, 1828, to June 15, 1836, when the Territory was admitted as a State into the Union; elected as a Democrat to the United States Senate in 1836; reelected in 1837 and 1843 and served from September 18, 1836, until his resignation on March 15, 1848; served as President pro tempore of the Senate during the Twenty-ninth Congress; chairman, Committee on Indian Affairs (Twenty-sixth and Twenty-ninth Congresses), Committee on Foreign Relations (Twenty-ninth and Thirtieth Congresses); was appointed Minister to Mexico to negotiate the treaty of peace between that Republic and the United States 1848; died on his plantation near Little Rock, Pulaski County, Ark., December 31, 1848; interment in Mount Holly Cemetery, where the State erected a monument to his memory.
Courtesy of Biographical Directory of the United States Congress
Next page