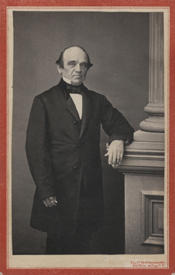 SEYMOUR, David Lowrey, Representative from New York; born in Wethersfield, Conn., December 2, 1803; pursued preparatory studies; was graduated from Yale College in 1826; tutor at Yale College 1828-1830; studied law; was admitted to the bar in 1829 and commenced the practice of his profession in Troy, N.Y.; member of the State assembly in 1836; district attorney of Rensselaer County from October 14, 1839, to October 14, 1842; master in chancery in 1839; elected as a Democrat to the Twenty-eighth Congress (March 4, 1843-March 3, 1845); chairman, Committee on Revolutionary Pensions (Twenty-eighth Congress); unsuccessful candidate for reelection in 1844 to the Twenty-ninth Congress; elected to the Thirty-second Congress (March 4, 1851-March 3, 1853); chairman, Committee on Commerce (Thirty-second Congress); unsuccessful candidate for reelection in 1852 to the Thirty-third Congress; resumed the practice of his profession; unsuccessful candidate in 1858 to the Thirty-sixth Congress; member of the constitutional convention of New York in 1867; died in Lanesboro, Berkshire County, Mass., on October 11, 1867; interment in Mount Ida Cemetery, Troy, N.Y.
Courtesy of Biographical Directory of the United States Congress
Next page