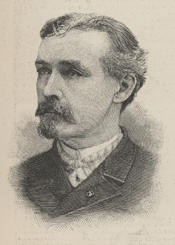 SIMONDS, William Edgar, Representative from Connecticut; born in Collinsville, town of Canton, Hartford County, Conn., November 24, 1842; attended the public school and Collinsville High School, and was graduated from Connecticut State Normal School at New Britain in 1860; taught school; enlisted as a private in Company A, Twenty-fifth Regiment, Connecticut Volunteer Infantry, August 18, 1862; promoted to sergeant major before being mustered into the United States service; promoted to second lieutenant of Company I of his regiment April 24, 1863; was graduated from Yale Law School in 1865; was admitted to the bar and commenced practice in Hartford, Conn.; member of the State house of representatives in 1883 and 1885, and served as speaker in the latter year; elected as a Republican to the Fifty-first Congress (March 4, 1889-March 3, 1891); unsuccessful candidate for reelection in 1890 to the Fifty-second Congress; United States Commissioner of Patents 1891-1893; resumed the practice of his profession; died in Hartford, Conn., March 14, 1903; interment in Village Cemetery, Collinsville, Conn.
Courtesy of Biographical Directory of the United States Congress
Next page