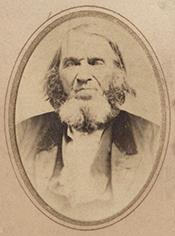 SINGLETON, Otho Robards, Representative from Mississippi; born near Nicholasville, Jessamine County, Ky., October 14, 1814; attended the common schools; was graduated from St. Josephs College, Bardstown, Ky., and from the law department of the University of Lexington; was admitted to the bar in 1838 and commenced practice in Canton, Madison County, Miss.; member of the State house of representatives in 1846 and 1847; served in the State senate 1848-1854; elected as a Democrat to the Thirty-third Congress (March 4, 1853-March 3, 1855); unsuccessful candidate for reelection; elected to the Thirty-fifth and Thirty-sixth Congresses and served from March 4, 1857, until January 12, 1861, when he withdrew; Representative from Mississippi in the Confederate Congress 1861-1865; elected as a Democrat to the Forty-fourth and to the five succeeding Congresses (March 4, 1875-March 3, 1887); was not a candidate for renomination in 1886; died in Washington, D.C., January 11, 1889; interment in Canton Cemetery, Canton, Madison County, Miss.
Courtesy of Biographical Directory of the United States Congress
Next page